Independence Day and all that stuff! 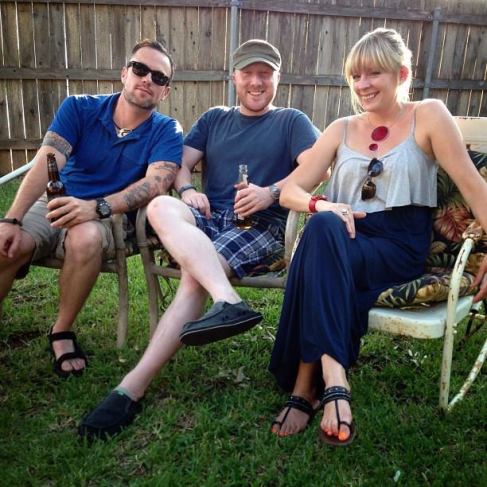 So there was this thing called July 4th a couple of days ago. Happened on a Wednesday, which made the whole week one big stretch of get togethers and lead-ups to get togethers. I was a fan.

My roomies from DC, Adrian and Sarah, were incidentally going to be in Austin, just an hour and change north from my whereabouts. So, I was able to get up there a few times and chill with them. Sarah has family in Texas. They were the hosts for the Austin excursion…some 12 or so of them.

I’ve never had a large family. Dad and I are it for the Salmons clan (meaning I’ve got to get at least four or five wives so we can crank out 20 or 30 kids). My Mom has a brother and sister, so there are a few of them, but they’ve always lived ways away; so holidays, birthdays and such are usually solo/immediate family affairs.

So when I get the chance to spend an evening with aunts, uncles, cousins, second cousins, step cousins…whatever, it’s a cool change of pace.

Sarah’s Austin crowd got together on July 4th. It was a backyard BBQ sort of deal. Red, white and blue, paper plates, mounds of food. Fantastic.

One cousin brought his guitar and joined in with one of the uncles. We had ourselves a bit of a singalong with requests and original songs by the musicians. It was pretty cool actually. I even had the chance to break out a song that, frankly, hadn’t come to mind in a decade.

Songs are like jokes…you hear them all the time, but when pressed to actually present one, they all seem to hide in the corners of your mind. So it was with me when Sarah’s mom, Corinne, asked me to sing.

“Josh, do you sing?” she asked during a lull between songs.

“In public?” she asked, smiling.

I then had to think of a song. For all the church musicals, theater musicals, holiday musicals and whatnot I’ve been in, I couldn’t remember a single song–especially one that could be pulled off without a great deal of help from the musicians in the crowd.

So I started to sing “And the Band Played Waltzing Matilda,” written by Scottish-born Australian Eric Bogle about the failed WWI campaign of Gallipoli. It was the only song I could remember from start to finish. And I could sing it without any instruments.

Well it was a big hit–so much so that I was asked to sing it again when I was up that way two days afterward. I was very flattered that they liked it.

Of all the ways to help America celebrate its independence, singing about Anzac soldiers falling on Turkish soil may seem out of place, but the sacrifice still garners remembering. Much like those who have helped us remain free.

2 responses to “Independence Day and all that stuff!”