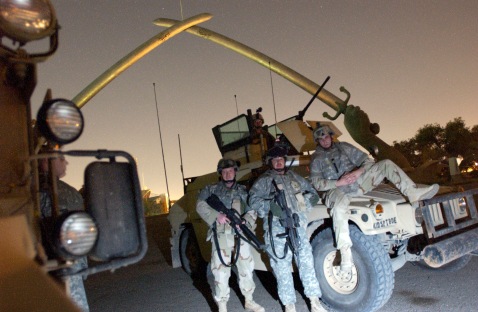 Under the crossed sabers during a convoy.

There is a danger in not qualifying circumstances—in letting people’s minds fill in the blanks. I’m not sure how to counteract it. But it can take advantage of people’s good graces.

I’m a soldier, recently returned from Iraq. After hearing that, immediately, every image of a battered, weary warrior comes to mind. Every romantic notion of self sacrifice, love, justice, perseverance is placed upon me. Every idea that I left family, friends, a dog, a wife, children; went through tearful nights and lonely weeks; enduring the crap of conflict every second of every day is credited to me.

And it’s easy to let people think all those things. In a few seconds of conversation, I can go from normal dude, regarded with a polite nod…to a hero, embraced with a handshake and an outpouring of sincere gratitude. “Yeah, just got back from Iraq…” Hell, I could get free meals and a few hookups if I were so inclined.

The works of past people in my position have given me this inheritance of honor. How do you take or defer this appreciation without overindulging?

I’m not looking for personal justification or pats on the back, I’m just pointing out that there are degrees of self-sacrifice and conduct.

Thousands of troops have endured horrors beyond tasteful description while in Iraq; but I’m a combat vet too? It just doesn’t fit.

I can feel the difference walking around Fort Hood now. I have a combat patch on. Others don’t. I can see some of the younger guys looking at that space on my sleeve. Do they wonder what it’s like? Do they think I’m some Blackhawk-repelling, knife-wielding, ninja?

Every time someone asks if I just got back from Iraq, I want to fill them in on the whole sordid tale—that I was always fed and relatively dry, and that I didn’t have to go outside the wire constantly like some folks.

Although I was close to getting a Combat Action Badge a few times, I never did (thank God); but I assume guys with that award go through some of this too. Some guys get a CAB for constant, consistent mortal danger—some guys get it because a tracer was fired over their humvee. But everyone that sees a soldier with a CAB immediately thinks “Wow, that guy is intense. He’s actually fought the enemy!” The same sort of imagination-filling-in-the-blanks goes on.

I can’t help but thinking this current philosophy of “everybody’s a warrior; everybody’s a hero” only cheapens things.

There was a master sergeant that deployed with my unit. He had been in 17 or 18 some odd years and never had deployed, but finally got tagged to go to Iraq. He worked in our command center—the most heavily guarded and protected building in our area. He went in, played with PowerPoint, and went back to his room. He had no roommate and easy access to phones to call family.

He lasted about two months before freaking out and saying he couldn’t take it. He got to go home. I saw him the other day at our base personnel center. He’s still a master sergeant, and he even has a combat patch. He still gets all the pats on the back and “thank you for serving” just like me.

During one of my first convoys to LSA Anaconda back in Iraq, we had to get some of our electronic equipment calibrated. The yard was run by employees of the equipment’s vendor and we had the opportunity to talk with the head honcho for a bit, as we were there all day.

The official job of one of the sergeants with me was electronics calibration, so he and the yard supervisor had a lot to jabber on about. Eventually the talk turned to money and the sergeant started to get wild eyed at the notion of all that cash, if he could land a similar job there as a civilian in a couple years’ time.

The thing that stuck with me was one of the parting comments the yard supervisor made: “Yeah. My wife hates it, but I keep telling her, ‘Honey! I’m serving my country.’” He gets to cash in on the “I served in the war” benefit package too?

And do personal intentions come in to play when considering degrees in quality of service?

I’ve met a few “I serve for my loved ones” for sure, but the majority of troops are in uniform because of job security, college money, or free medical care. Most of us are enticed to enlist for purely self-serving reasons and placed into positions of self-sacrifice, where the honor-credit thing comes in.

Every one of us will list God, country, and apple pie as the right things to say when asked why we serve—but take away combat pay, catered dining facilities and some of the other benefit packages and we’d see how much of an army patriotism alone fetches.

We’re all mercenaries on one level or another. I guess I just get a little uncomfortable with all the saintly talk of the epitomized warrior as a creature of grace and strength when I’m so used to the squabbling, petty band that actually exists. And that’s not a hit on America—soldiers have always been a rowdy and saucy bunch.

People see “soldier” and their minds fill in the rest. What’s with this noble stereotype?