They look harmless. They’ll steal you blind, the second you look away.

“Mista Mista, give me a dollar!”

“Mista Mista, I want a football. You give me football.”

“I want bullet. You have me bullet.”

“You come back tomorrow? You bring ball!”

“You come tomorrow. You bring light. Give me light.” 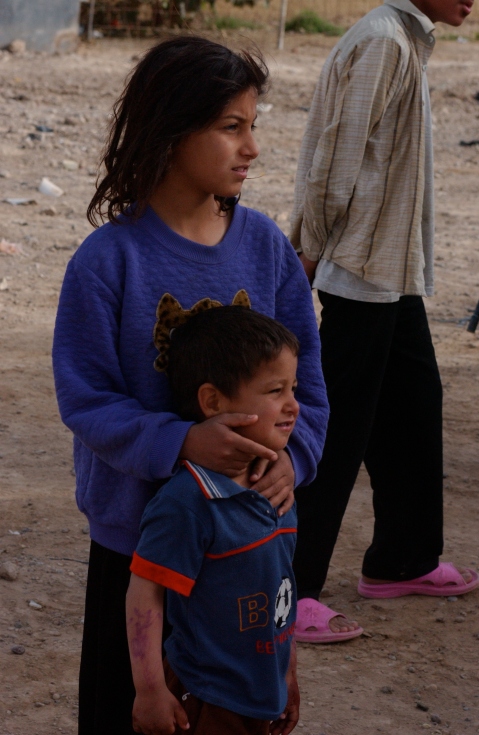 The girl had the most striking sapphire eyes.

“Oh yeah,” one of my patrol mates said as we waded through the sea of youth. “They’re cute at first, but try back on visit three or four.”

We wound our way through the living maze to a plain hut across a trash-riddled field. There, crossing into the dark interior, we shed our flock and were awash in the scent of fresh-baked bread.

The man’s hands moved with the speed of a thousand times before.

Fire danced from a hissing gas pipe that ran along the inside of the brick oven. A flat opening sat low in the room, and the baker worked raw dough into flat triangles on a long pole that nearly stuck out of the door.

After shaping them, he used the pole to place them deep inside the oven. One dollar bought a full bag’s worth, according to my translator. A young boy took the money and readied a small, black plastic bag.

The man chucked the bread down the line.

A few minutes later, the baker again worked the pole, and out came the finished bread, scooped up with some sort of learned technique. With a shove, the baker sent the bread flying over the brick counter. It skittered across the flour-slick surface into a trough at the end of the counter, where the boy counted out 16 pieces per bag.

“Mmmmm, breakfast,” I said. Our patrol was coming to a close. Nothing significant to report. One response to a possible IED earlier turned out to be nothing.

“All the better,” said our staff sergeant patrol commander. “One less to do before home.”

Our three-vehicle patrol took a turn before hitting Camp Taji and wound our way through a village who’s name I’ve forgotten already. A small collection of huts and houses lined mud streets, flanked on all sides by a peppering of recently-desposed garbage.

“They don’t get rid of the garbage,” my interpreter explained, “because the goats need something to eat.”

“Well, that’s one way to recycle,” I said, and took a bite of bread.

Delicious and cheap. Can life get better? I submit that it cannot.

3 responses to “Living on bread alone”