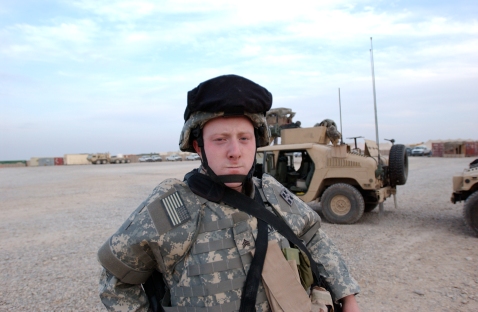 This is my “at least I’m not putting up with officers at the moment” face.

Our unit motto is “Just Get It Done.”

It’s the attitude that drives us. Because we get it done – or ‘r done. We get ‘r done.

“Yes, sir?” I replied. My section sergeant was at a briefing, so I was in charge.

“We’re having a demonstration of escalation-of-force tonight. The colonel wants video of it.”

“Sir, we have no video cameras.”

“So coordinate with another brigade.”

“Tonight! We need an answer to the colonel of ‘yes’ in three hours.”

Whoa, ok. The only brigade with video equipment was newly arrived on North Taji and didn’t have phones yet. So it was a good hike up to their offices.

Their video camera was already committed on another assignment, but they did have a photographer with a night-vision lens that could help us out. We booked the photog and proceeded back home.

“It’s all we could get on short notice, sir.”

*Editors note: That night, in the rain, the loaned photographer dutifully made the hike down to our complex and we headed out to the site, just to find out the whole exercise had been cancelled. So who got it done? I’m confused.

“The colonel wants a copy of a video he saw when he was down south. Get it to him ASAP!”

I told my boss once she got back, and she was able to call a few people to find out just what the heck he saw, or where he was for that matter.

Turned out it was a picture slideshow of some unit’s family members back home, made for “a soldier’s wife,” set to a song called “I’m a soldier’s wife.” Typical “you’re the strength of America” sort of sappy stuff.

By the next day, a CD copy was on his desk. Whew! Point for the good guys.

“Yes, sir?” I replied. At another of our myriad briefings, she was out and I was again doing my journalist thing, transcribing notes.

“The colonel wants you to edit that video and make it from our unit.”

“Sir, we don’t have the software to—”

So, hrmmm…I guess I could buy some illegal pirated software with my own money and get ‘r done.

Tune in next time for the amazing, life-changing conclusion!!!