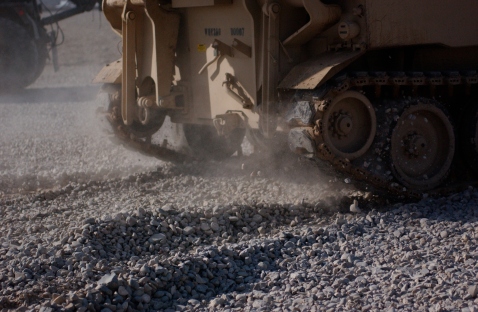 Tanks are heavy. Write that down.

“This the place?” I asked, as we pulled into a huge gravel field, littered with rows of vehicles.

“Yeah, I’ve done this before,” he smarted back.

With all sorts of belches and piffs from ten air-brake systems, our convoy came to rest at Tillil Airfield.  The personnel from the 377th Transportation Company began their work of unloading their cargo.

“I’ll tell Ops we’re here,” the TC said and began punching away at a large keyboard we used to communicate with base.  Typically Army, the device could double as a desk, and served the same text-messaging function that modern devices small enough to fit in teenagers’ palms do in the outside world.

I donned my gear, grabbed my camera, and descended to the gravel below.  If climbing into a helicopter with four layers of gear is tricky, then climbing over a driver’s seat and down a ladder with helmet, vest, camera and weapon is downright acrobatic.

It was time to get to work.  I sat and listened to the guys as they joked and bickered.  Ramps were lowered, chains loosed, Paladins started, and our cargo began rolling off the ramps.

Snapping pictures always gets a look or two from the guys.  Usually soldiers smiled and asked where the pictures would go, always hoping for a spot on CNN or some TV station.

“Naw, I don’t know either,” I’d always have to say.  And I didn’t.  There was no Taji newspaper, and the units assigned to my brigade were scattered from all over the world.  Any one or two spots used to hearing from us would have nothing to do with – say, the 377th.  We’d just send stories along to wherever we could, and usually found out where they showed up by secondhand accounts of “I saw a photo you took while in Georgia” sometimes months later. Best case, I’d be able to send an email to their commander, letting them know where to find the printed story.

“Not the Army Times?” I’d also get, hopeful.  “Nope, sorry friend, they take their own pictures,” I’d reply.  “We’ll just have to wait and see.”

Some time later, after scanning through my collected images to make sure I had enough, I’d break out my Dictaphone and pick a few soldiers to interview.

That was where you got to know some people.  Interviewing is both my least and most favorite part of the job.

On the one hand, you get to connect with people, learn where they’re from, what they like, what they do, how they do it.  But then there’s always that angle you’re looking for.  This story would be about how the 377th Trans had defended freedom, promoted justice, and brought peace throughout the region.

It was hard to get a 19-year-old teenager to give me that.

“Yeah, this place sucks, but I’m almost done, so woohoo!”

The soldier was excited about his mission, barely able to contain his enthusiasm for his part in the war.

Soon we had finished unloading the Paladins, and took on some old Army five-ton trucks.  My TC, the convoy commander, had received new instructions from his type pad.

“We’ll head up and grab some chow, then assemble at 1300 to SP north,” he informed the gathered truckers after we had finished lashing down the new cargo.  Two HETs would roll empty in case of a breakdown.  On a long haul like this, it was normal to have some hiccups.

“These vehicles are old as sh*t.  They break constantly,” my driver said.  Lovely.

Packing ourselves back into the trucks, we all rolled out toward the nearest chow spot.  If truck drivers knew anything, it was where every dining facility was in theater.

My truck had to go to another part of the base where our gun-truck escorts were resting so we could tell them about the SP time and that chow was nearby.  After the quick detour, we headed back toward the promise of food.

I was in that weird numb state, having been awake for more than 24 hours, hyped up on caffeine.  I was hungry, but on the verge of nausea from the candy and soda.  I was tired, but awake from the need to be active during daylight.  Still, a burger would be fine.

Choosing to drive our HET to the chow hall (and why not?), we passed several other 377th guys on the way.

“There’s a bomb scare at the chow hall.  It’s closed.”

We meandered as well as a HET could meander over to the post exchange.  Entering the gym-turned-store, my driver commented, “Welcome to the diet of the truck driver, all junk food.”

Thirty bucks later, our supply of drugs and sugar replenished, we set back out to our truck to enjoy a few minutes of candied lunch before the trip north.

These truckers were used to arriving at posts at all hours of the night, with only the 24-hour exchange to offer them any chance at food.  I wasn’t.  My stomach would have preferred the burger, but another bag of Skittles would have to do.