Let me just say that applying to graduate school while at war is a major pain in the bootay.

Something will be written tomorrow, I can feel it.

Picture that (Pics from around Taji)

Just thought I’d post some pics of my general work area. I snapped these one night as I was coming in from another photo shoot. Fair warning, I might use these again as headers for posts that I don’t have photos for. Just letting ya know.

Here’s the lit sidewalk that leads up to our headquarters building. There’s a basketball court across the street where the camp has tournaments at night. Hip hop blasts throughout the evening. I bet it irritates our colonel to no end, but that’s life. 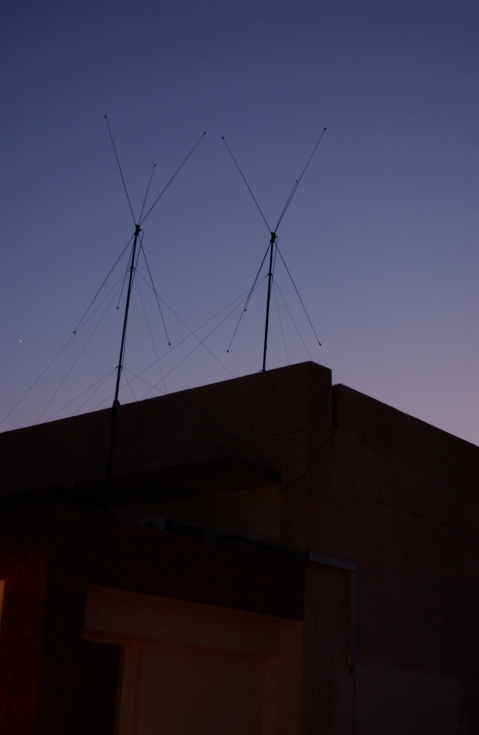 Broadcasting all manner of secret awesome.

Just some antennas on a roof. I liked it. 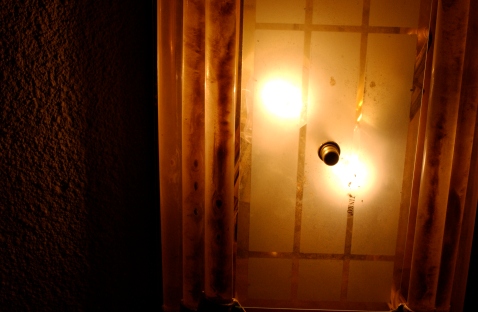 Here’s a close up on one of the lights in our headquarters entryway. Again, just going for something different.

Ah yes, building 94. That’s where my office is. And it’s where I am when I’m not gallivanting around on some errand or mission.

Hajji likes narrow-ass sidewalks. You have to sidestep into the dirt to pass people, or to walk around the air conditioner units bolted to the pavement. 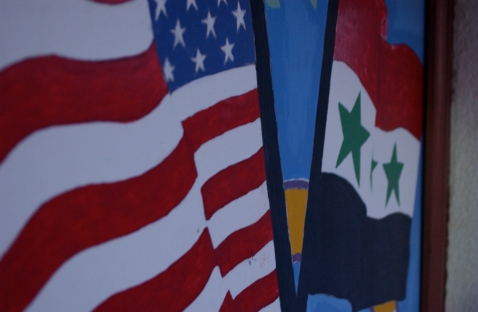 It’s official. The new enemy is…

The Pentagon has issued a report stating that now the preferred weapon of the insurgents is the roadside bomb.

You think people would have figured that out since about 7 out of 10 reported deaths are caused by a ‘roadside blast.’

Now stories are springing up everywhere about this “new and insidious enemy.”

The real trick will be if we can figure out a way to stop the tens of millions of dollars in training, equipment, personnel and logistics that each convoy represents being interdicted by some guy with a couple sticks of dynamite strung together and a remote control. Then we’ll be getting somewhere. 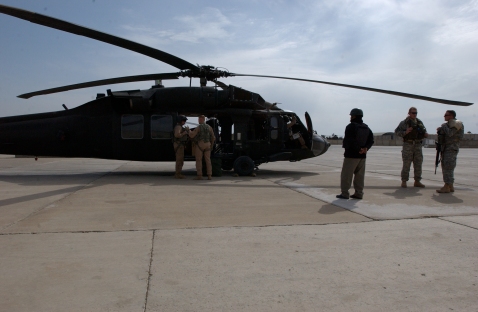 Since internet is still out in the trailers…(not that I’m complaining, water is still running and food is still here, internet is hardly an expected utility)…I’m running about a day behind in my tales of smiles and cries.

At 6:15 a.m. I sat on the leather couch in front of the colonel’s office, geared for combat, camera bag in lap. I’d be flying with the colonel to Camp Seitz, a small dustbowl of a base on the outskirts of Baghdad, to check on one of our subordinate maintenance battalions.

My mission was a little unclear: look around for a story. I had two gigabytes of camera card storage, my notepad, and my personal voice recorder. I was ready to find something to talk about.

Feeling like a flipped tortoise on the couch, I planned for a two-minute get-up session so I wouldn’t be late to meet the drivers and colonel out front.

Getting in and out of vehicles, helicopter, non-tactical (i.e. civilian trucks) or humvees, with all the trappings of a normal journalist and a soldier is quite a spectacle. Especially if you’re trying to play it off. I really need to gear up and just practice, because when a chopper is spinning on the flight line, doors open, crew chief waving you on, you don’t have time to muck around.

All that to say I proved I was a card-carrying member of the dork-us among-us brotherhood, teetering off balance and clanging doors. Good stuff.

Once in the Blackhawk, the door closed and we sat – noise too loud for conversation, softly rocking left and right from the engine torque. The sunrise jabbed through the mire of the dingy windows. It was a good camera opportunity, but I figured I’d not break out the bag, attach lenses and angle for a shot in the cramped passenger compartment. Next time, I needed to remember to bring our small point-and-shoot and strap it to my leg like a sidearm. That way – instant pictorial goodness.

The chopper throttled up and we rose and tipped forward into the morning. Banking left, we swung around to the south, heading toward the capital.

There is a lot of farmland in between the Euphrates and Tigris. Aside from the choking haze, it seemed like a scene from the Midwest – flat fields of crops in tidy rows. Power lines dip up and down along the occasional narrow country road.

After a minute, the crops faded into the haze and a huge swath of palm trees passed underneath, dappling the dawn into a shimmering blanket of light and shadow on the forest floor.

As the trees left our view, there was a discernable thump that shook the chopper. The colonel looked over to me and then outside. Everything seemed all right, noise-wise. Sgt. P, the colonel’s driver, motioned to one of the windows that had a streak of red across the top. “Bird,” he mouthed carefully over the engine din. We did shift left and right a couple times, but the crew didn’t seem too panicked.

By that time, we were entering the city’s airspace. Going low, we zoomed over neighborhoods.

I didn’t know what to expect from the city. Buildings were built side-by-side in the typical Iraqi/Adobe sun-dried mud style. Water lay everywhere in stagnant, putrid pools, flanked by piles of debris and garbage.

Nearly every city block had a corner which seemed to serve as a piling ground for refuse. Clothes lines were strewn on every rooftop, displaying clothes as the only color among the drab and dreary grays and browns.

Toward the city center, several buildings raised a few stories above the stubble of satellite dishes that peppered the house roofs.

One of the taller buildings stood dormant and empty, its side gouged out by some sort of military strike. Many of its windows were smashed out, letting daylight come and go. Its sinews and muscles of people and flickering lights long gone, the old skeleton remained.

The chopper swung lower and started to shift left and right. If I wasn’t watching the cityscape so intently, I may have been concerned. We certainly were in a hurry.

Passing over a highway, we saw here and there, the burnt out hulks of a bus and a few cars. Kids played in the shadow of the bus’ twisted metal and glass – a prickly playground.

As we were zooming toward the ground, the helicopter pad appeared below just in time to receive us. We were somewhere in the Green Zone, the section of the city cordoned off for coalition use. This wasn’t Seitz.

Our door flung open and the crew chief began yelling into the colonel’s ear, pointing to the rotor. The engine was spinning down, and the rotor slowed from a disc to individual blades turning in the sky. A good chunk was missing from one of the blades, obviously the cause of the concern.

“Sorry this isn’t Seitz, boys,” the crew chief yelled once the noise had somewhat abated.

“We had to put her down. We hit some damn bird down there and it bent the sh*t out of our rotor. We ain’t going anywhere else today. You’ll have to find another Blackhawk.”

Thus went my encounter with one of Iraq’s dreaded Jihad Birds.

The crew chief told us they hit choppers all the time. Most of the time, he said, they just made a mess, but every once in a while, they cause a big enough ruckus to put chopper down.

Come to think of it, I do remember something screaming what sounded like “For Allaaaaaaah!” just before the thump. I thought it was just my imagination.