Keeping it real on killing 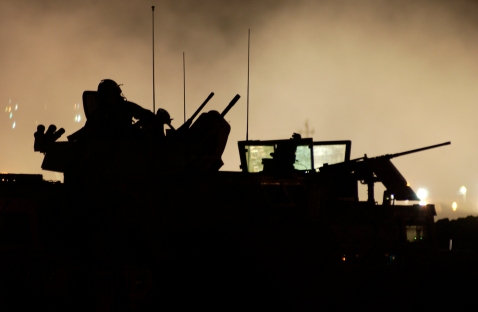 Gun trucks on overwatch during mission.

I’d count to three, then I’d end this guy’s life.

All the mental checks were done. Night aperture? Check. Round chambered? Check. Aim? Center of the chest. Clear shot? Perfect.

He was in my sector of fire, along the right side of my truck. It fell to me to shoot. It fell on me to kill.

Ten minutes earlier our convoy had halted along a particularly prickly stretch of road on our way to deliver mail to several camps in the Baghdad metro area.

“IED,” the call went out on the radio. The first vehicle halted quickly, followed by the rest of the convoy. Dousing our lights, we draped the night around us.

I would remain standing. My station on this particular romp was in the rear of an old Army 5-ton truck in what we call a “gun box” – a steel box dropped into the truck bed. It was pretty low tech, consisting simply of a few welded steel plates. At the front of the box was a pivoting turret with a mount for a .50cal, or in our case, a 240B machine gun. My gunner was assigned to cover the convoy’s left, leaving me to wander back and forth.

We were the third gun truck, behind the prior two GTs and four civilian mail trucks. Two more trucks, a bobtail, and the final GT made up the final portion of our group. I guess we were in the middle-ish.

Time in a halt ekes by. Your eyes dart in the darkness to every alley, rooftop and patio, trying to spot a possible ambush before Haji gets an RPG off.

“Insurgents will hijack a house, use it to fire a few rounds off, and then get out,” my convoy commander said – a sergeant just like me. “So don’t feel bad if you have to fire back, the people who live there usually run away.”

After a few minutes, all the shadows start to move. Every sway of leaves, every bag tumbling in the street becomes a group of bad guys. It can make you a little batty, especially since you can’t ever hear anything over the convoy’s engines idling.

But, there! Shifting shadows, coming down the road on our right. I swung my spotlight around and flipped the switch. Who would be running along an American convoy at two in the morning?

The answer was an Iraqi in a blue jacket, jeans and with an AK47.

“Here we go,” I remember saying. The gun truck behind me started shouting “Stop! Stop!” to the guy, but he kept on running.

Just then a car, hidden under an overpass a few dozen meters behind us started up and pulled forward.

Okay, now this was getting interesting. The guy made it to the passenger side of the car. What kind of car was it? We were looking for a specific description of car that had attacked a convoy earlier that night. This wasn’t it, but looked close.

He still had his rifle. I watched it carefully. Other soldiers were yelling plenty, I would focus just on his motion. Any move toward us, and I’d fire.

The man with the rifle now was very nervous. I guess he noticed about five weapons pointed directly at him and three spotlights illuminating any avenue of escape. He became very fidgety.

It was strange since the other people in the car were so calm. What was this guy’s problem? Why was he so scared? My first reaction was that this guy was the trigger man for the IED we’d stopped for. He stood around for a few minutes, saw that we weren’t going for it, and decided to try to get the heck out of there before EOD came. It was awfully suspicions how he came out of hiding like he did, and just to have a car waiting for him.

But that was all circumstantial. I’d seen enough episodes of Law and Order to know I didn’t have an outright reason to send this guy to Allah. I’d have to wait for something more.

He got in to his car and started pulling forward into our convoy. “Woah woah woah!” We all shouted, and they stopped the vehicle.

Again, the driver and rear passengers stayed still, while the jittery guy started climbing out quickly. He rounded his vehicle and started walking toward our convoy.

My hands tensed, pulling my rifle close. My aim was rock solid. I was totally calm. No adrenaline, even. Here I was, on the ragged edge, where a man has to face the possibility that instead of a kind, loving citizen, he is a killer, a harbinger of oblivion. It was strange – empty, passionless, calculated.

My trigger felt like a knife’s edge. I held my finger very carefully, poised, ready to pull back and send a shard of metal and fire streaking toward this man and wound myself at the same time. He was still a few meters away. I’d count to three. A very quick three.

On two he stopped, walked back slowly to his car, got in, and drove away very slowly.

“Dude why didn’t you fire,” some of the guys asked afterwards. “I would have totally lit him up.”

Easy to say this or that afterwards, but it’s a different story when you’ve sighted someone in.