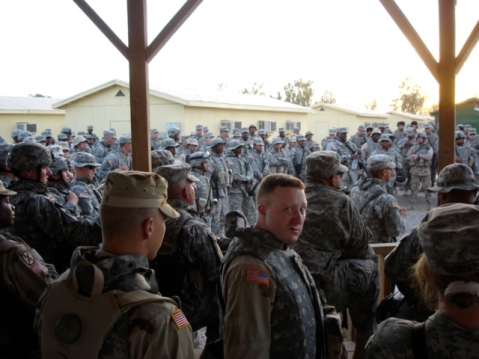 CAMP TAJI, Iraq – Hopes for peaceful cooperation had all but evaporated today as further skirmishes broke out along the Sgt. Joshua Salmons and Commanding Officer’s border.

A recent envoy sent by Salmons returned this morning bloodied and beaten, citing abuses by the CO’s policies.

“That’s it! No more words,” a Salmons spokesperson said at a press conference this afternoon. “We have done so much for CO to be answered with so little.”

The envoy incident was the latest episode of aggression by CO forces against the sovereign mission of Salmons presence in the region.

Although initially chartered by major powers in theater to support CO interests, Salmons efforts were to also have a far larger effect by relaying news and soldier accomplishments to those on the home front.

However, they have made little to no progress in recent weeks due to hostile action from several “allied decisions.”

“Everything we’ve pushed for has been destroyed,” a top military official said. “We’ve been hemmed in. We are to just survive, and that is unacceptable for our larger mission.”

Two major Salmons operations have been frustrated so far in November.

One was to coordinate the filming of an episode of “Monster Garage” in CO-Salmons territory, allowing the celebrity Jesse James to visit and interact with CO soldiers.

The other was to begin construction on a joint-owned brigade newsletter, to serve as a sounding board for CO messages and soldier concerns.

“Our operations were to make the CO’s life better – to bring recognition to his unit,” Salmons officials said. “Moreover, they were actions expected of us from mutual higher allies to continue the war.”

Calls to CO liaisons went unanswered as of press time, but memorandums from CO correspondence bearing the short message “Stop!” were provided to SNS by Salmons offices.

“That was it, weeks of work down the tubes with one word,” a Salmons soldier said. “If we don’t show progress soon, we’ll be relegated to scut work and sent home in shame.”

Rumors abound as to why allies have become enemies in the face of wartime operation. With no reasons given from CO, there’s little to counter the hearsay explanations.

Now, with little to do other than organize stacks of paper and check email, Salmons professional development is at an all time low, clouding forecasts of future promotion or achievement.

How all of this will play out as the deployment continues is still unclear, but if trends continue, the meager forces of Salmons may see themselves locked in a desperate battle against the much stronger CO war-machine to support the cause for which they were brought to war to achieve.

“We will not allow our legacy to be dictated by the short-sightedness of this regime,” Salmons officials said.