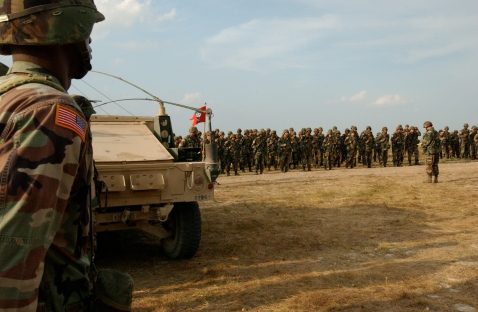 Here it is, just a few days before we leave.

There is still lots to do: The A and B bags must be stuffed full of military equipment; the car has to be junked (yes friends, my car died); the apartment must be evacuated; and the casing ceremony must take place.

Like many military ceremonies, the casing spectacle is stepped in tradition dating from way-back-when. Like every other ceremony in the Army, the casing hoo-ha involves a large formation of soldiers standing still, while the command group does several spin-arounds and walk-to-this-patch-of-grass in the front area of the parade field.

The ceremony itself demonstrates the act of packing up the unit flag as we leave for Iraq. Once we’re there, a reciprocal ceremony will take place, unpacking the flag to say “we’re here.” Speeches by importants will be at both, of course.

To the soldiers standing still for hours, ceremonies are to be endured. To the commander, they must be executed with strict precision, as any missed mark is a stain on him. To the media, being the first element of the 4th Infantry Division to deploy garners a modest news interest.

And we are the first out, so that’s sort of cool. It will take place on the division’s own parade field, so no more mud fields for us. We’ve moved on to grass!

Anyway, tomorrow begins the rehearsal process. Soldiers were told to bring in their uniforms for inspection, to ensure all the enlisted members don’t look too stupid in front of the cameras.

As the magical day approaches, everyone in charge starts to get irritated. Everything can’t happen fast enough; and everything seems to be going wrong. Those of us that see this as a ceremony instead of the Lord’s judgment just let things blow over.

With any luck, the importants won’t make this week any busier than it already is. There’s still much to do outside of this damned ceremony.

Between the packing, new equipment issue, forms, training, paperwork and ceremonies, I about go nuts. Christ, I wish I could just get on a plane and get there!